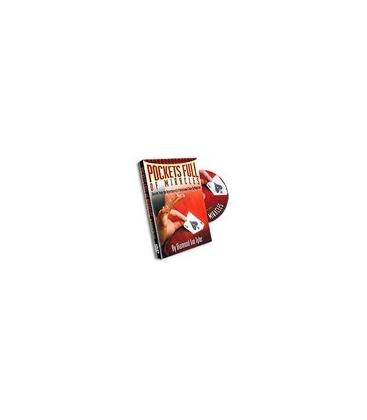 Magician Jim Tyler, who is better known as Diamond Jim, has been practicing magic since he was a child and performing professionally since 1986. He has received awards for his close-up magic from the TAOM and IBM and is co-owner of Magical Gadgets,

More info
Magician Jim Tyler, who is better known as Diamond Jim, has been practicing magic since he was a child and performing professionally since 1986. He has received awards for his close-up magic from the TAOM and IBM and is co-owner of Magical Gadgets, Inc, a magic and toy store that’s based in Frisco, Texas. In addition to “Pockets Full of Miracles,” Diamond Jim recently released a new DVD, “MIRRORS” (look for a review soon, here at Magic & Illusion), and has developed and marketed numerous magic effects.


I appreciate Diamond Jim’s magic philosophy. He takes solid effects and adds his own touch, to create commercial, entertaining results. Because of his experience working in joke and magic stores, he incorporates various props to add humor and other twists. Who would have thought of using the “Horrible Thumb” gag in an effect involving thumb cuffs, performing spellbound with glass gems or identifying a selected card with a mousetrap? With Diamond Jim, just about anything is possible.

The DVD offers 23 varied and entertaining effects and none are overly complicated or knuckle-busters. Most are appropriate for walk-around and restaurant work.


Fun card revelations are a Diamond Jim staple. “Baseball Diamond” is his take on the billiard ball from a card case. Here, however, Diamond Jim uses playing cards with pro ball players, and when the ball appears, it’s a baseball with the chosen player’s autograph. It’s a fun twist that plays well to baseball-oriented crowds. In “Burning Impressions,” the image of a selected card appears on a burnt business card. If you can get away with open flames in your venue, this one is a shocker for lay-spectators. In the tense “Cat & Mouse,” a chosen card is revealed with a mousetrap that slams shut.

“The FBI Trick” offers an entertaining escape from standard thumb cuffs. Diamond Jim dresses the routine with a sore thumb gag that enhances the overall effect. It never occurred to me to perform an escape in a restaurant, but here’s a routine that works well in such a venue.


Diamond Jim features two IT effects. In “Soaring Straw,” a drinking straw jumps and flies from your hands. In “Animated Cardbox,” a cardbox spins in your hand, stands up and opens its flap. And the best part is, with “Animated Cardbox,” you end up clean. Both are visual routines that will capture the attention of any audience. An effect that appears to use a thread, but doesn’t, is Frog Hair. Here, a card turns over when connected to an “invisible” frog hair.

Two fun effects are Birthday Bill and Fireball. In Birthday Bill, you borrow a dollar, wave a hole puncher over it and holes mysteriously appear. When you open the bill, the holes spell “Happy B-day”-a great birthday trick that leaves spectators with a souvenir. In Fireball, a torn piece of paper is restored in a burst of bright flame. The props for Fireball are not practical for walk-around, but will work in a stand-up act.