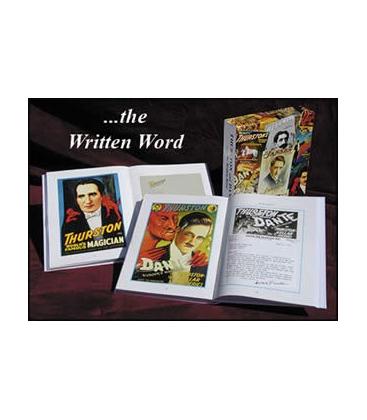 "Much is contained in these 782 pages. These letters constitute a primary source for information about magic's "Golden Age." Anyone interested in the magic and magicians of that era, or trouping big illusion shows will find these books invaluable."
Claude Crowe - MUM, Oct. 2007


If you want to study the history of any given magician, and get insight into his personality, there is no better way to do so than through his correspendence. Phil Temple's latest publication, "Thurston and Dante . . .the Written Word" does just that!

The publisher describes his new work as follows:

"Twenty five years ago, in 1981, when a limited edition version of this material was first made available as the 'Thurston-Dante Letter Set,' I wrote the following remarks in my 'Introduction':

“In presenting the Thurston-Dante Letter Set, I have undertaken to provide the magic fraternity with the most complete historical record between the last two ‘greats’ of magic ever offered to conjuring historians.

“For years, these letters and thousands of other ephemeral items relating to the professional career of Dante (Harry Jansen) were locked away in old theatrical trunks until June of 1980 when the trunks were released to me for disposition by Milt Larsen. After months of sorting, identifying and assembling, many of these 'collectibles' were then made available to those who would appreciate them most – magic memorabilia collectors!

“A true collector of magic memorabilia or student of the art of magic will appreciate the wealth of first hand knowledge contained in this publication. These letters will provide hours of enjoyable reading, offer the reader insight into the workings of trouping the world’s greatest magic shows of yesteryear, and reveal illusion secrets heretofore unknown to many in the magic profession. These letters present many of the various magic personalities of the time, as seen through the eyes of Thurston and Dante, and in general show the true relationship—as it really was—between these last two greats of magical history.

"Now, 25 years later, when reading the more than 750 pages of this enhance collection of letters and related material, a new generation of magic historians and enthusiasts can travel back through time to that 'Golden Age of Magic,' quite possibly finding their journey as magical as the art itself."

Both volumes are hardbound and total 783 pages.