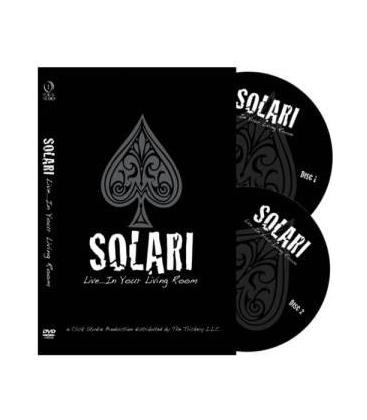 COMPRESSED:Magically shrink an ordinary deck of cards into a mini deck right in front of the spectators eyes!

BOB's BRAINWAVE: An easy to do Brainwave where one card is gaffed.

SIGNED, SEALED and AMAZING: A freely selected signed card vanishes, only to be found in a sealed envelope that has been in full view all along! No Palming!

MATCH IT: A box of matches magically appears sandwiched between two selected cards. A very unique routine that you will want to add to your close up arsenal immediately!

CLIPPED: A freely selected card is isolated with an ordinary paper clip. This clipped card matches your jumbo card prediction.

SOLARI'S MONTE: Learn the secret behind this 3 card monte effect that has fooled and sold in the thousands!

RING RAPTURE: Visibly melt a gold ring onto a gold necklace right in front of the spectators eyes.

CUNNING CARD CASE: A deck of cards is shown in its case. Magically and instantly the card case vanishes. Great opener!

ULTRA MATCH: A three card prediction that has fooled some of the biggest names in magic! No skill!

METAMORPHOSIS BILLS: A $5.00 bill and a $1.00 bill magically change places under impossible conditions. Both bills may be signed and borrowed. This one replaced our first examinable 5&1 bill transpo from many years ago called Definitive 5&1 Bill Trick.

PREMONITION: The spectator has full control over the deck yet their selection always matches your prediction!

JUMBO PREDICTION: An easy prediction with a jumbo card that you will use all the time.

SOLARI's IMPOSSIBLE ACES: Bob's version of the famous McDonalds 4 Aces. His version does not utilize double face cards or sleights.

UN-BILL-IEVABLE: Visibly penetrate a borrowed bill with an ordinary knife. Bill is returned to the spectator unharmed! This is visual magic at it's best! NO skill!

BRAINWAVE FOR DUMMIES: An easy to do brainwave that has fooled some of the world's most knowledgeable magicians!

FOOLS MONTE: An easy to follow (?) 3 card monte routine that you will use all the time.

GIFT BOX PREDICTION: A gift box is shown empty. 10 different cards are mixed by the spectator and placed in the empty gift box. A single card is freely selected from the box. This card matches your prediction every time!

BLING BLING RING THING: Five rings are shown, each with a different color stone. Spectator freely selects any ring and places it in an ungimmicked ring box while your back is turned. The four remaining rings are hidden from view. Immediately you know which color ring is in the box! An old time tested method!